Power Sport Taekwondo played host on Saturday, 29th January 2011 to a team of 6 koreans from the World Taekwondo Peace Corps. It was a hectic one day event for our members especially for Mr. Yap Ping Hong and Mr. Tan Kien Tat. Early in the morning at 7.30 am both of them were in Bukit Jalil to pick the Koreans where they would be staying for a month. Their mission – to promote peace through taekwondo. 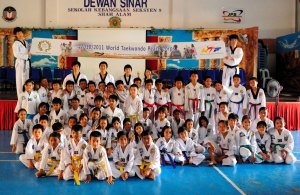 The first training session at 9.30 am was at SK Seksyen 9, Shah Alam. Here, the primary kids together with the secondary students had a fun time interacting with the koreans: learning as well as training with them. There were much laughter and giggling among the kids. They learn that taekwondo can be serious and fun too. 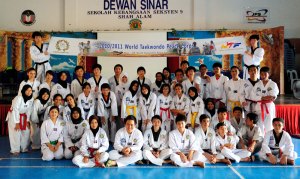 After the session, the koreans were given a treat to a sumptuous lunch at a well known chinese restaurant in Klang. Wanting to be hospitable, we had carefully planned for this, thinking that it would be a good idea to let them try something different. However, it was not to be so, much to our disappointment. The koreans did not really savor such food. Afraid to make such mistake again, this time we asked them where they would like to have their dinner. Korean barbecue was their reply!

After lunch, they had a brief rest at our home. Our next stop was at La Salle Klang, The students here had as much fun like the earlier session. It’s as if the children had never enjoyed so much in their training before! MGS was next, followed by Kwang Hua School, the last session.

It was already 6.45 pm when we finished. We were all exhausted. Without wasting much time, we took them to a Korean Restaurant in town where we had korean barbecue. It was really satisfying watching them relishing the food served that evening. Their facial expressions during that meal itself more than compensate for the afternoon blunder.

It was already late, 9.30 pm when Ping Hong and Kien Tat sent the koreans back to Bukit Jalil. We at Power Sport Taekwondo had much to thank them for their commitment and loyalty. 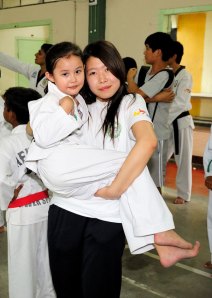