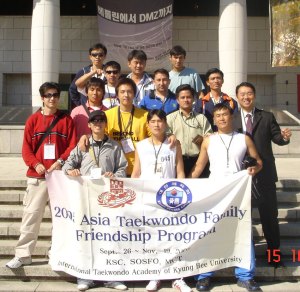 In September 2005, fellow member Yap Ping Soon was one of two fortunate Malaysians who participated in a program organized by the Korean Olympic Committee. This is the first such program organized and he is joined by 10 other taekwondo members worldwide. Besides Malaysia, other participating countries include Vietnam, Uzbekistan, Kazakhstan, Krgyrugistan and Mongolia.

Sitting under the feet of a World Champion

Throughout the 8-week course, participants were exposed to various trainings which include physical and sparring training, poomsae, demonstration, taerobics, refereeing and instructing lessons.

The participants were privileged to have Master Chang Myong Sam, a 3-time World champion and a former Olympic champion as their coach for both physical training and instructing lessons. During the course, Master Chang lectured the participants on the Olympics style of training and free sparring techniques, training plans for normal and also challenging programs for tournament fighters.

Their physical training consists of 4 sessions a day. It begins at 630am with jogging, followed by gym training. Sparring training sessions will be resumed before and after lunch breaks. At night, self training takes place. Self training is the period of time where the members train on their own to practice their skills, master their movements and maximize their performance.

According to Ping Soon, although the training schedule was hectic and exhausting, he was surprised at the level of enthusiasm and discipline the local team members possessed. It was the kind of atmosphere he noticed that lacked in training sessions back in Malaysia. The high team spirit he observed in the professional team members motivated him to train harder and improve.

Training with the professional team members lasted for about 3 days only. This was because the professional team had to prepare for Korean Championship. After training a few days with the team, the participants carried on with poomse lessons which were conducted by an all-time gold medalist instructor. During these lessons, the fundamental and the right method to execute pattern movements as well as revision on taegeuks 1 to 8 and koryo were taught.

A Variety of Skills

Participants were then accompanied by Master Hwang Im Jae, a renowned Korean International Referee during the referee course. Master Hwang explained the latest refereeing system and hand signals and the participants were given a chance to practice with the Electronic Scoring System (ESS).

Apart from that, participants also learned demonstration techniques which comprised of self-defense, plank-breaking and taerobics. Again, they were honoured to be under the guidance of one of the best demonstration instructors who taught them how to perform aerial kicks and a full set of techniques for a 15-minute demonstration.

“Taping” lessons were also conducted. Participants learned the various forms taping methods to deal with common injury to taekwondo fighters and practitioners. Sports massage that helps to relax muscles after strenuous training and strengthen the spine was also demonstrated.

The trip to Korea was certainly an eye opener for Ping Soon. Not only did he get to train with experienced fighters under reputable coaches and witness the many different training methods and punishments, he also managed to do some traveling. Ping Soon, together with his other 11 new-found friends, visited places such as Kukkiwon. They also manage to witness the Korean Championship and Hanmadan Championship. Other attractions visited include Jeon Ju Folk Village, National Museum, paper factory and many more.

Highlight of the Trip

The highlight of the trip was the friendly match between the participants and the local fighters. This was the time where the participants put their hard work and effort during training to test and gauge their performance. For Ping Soon, it was the most unforgettable event as he was given the opportunity to spar with experience fighters from the secondary professional team.

Throughout the entire course, a lot was learnt and Ping Soon hopes to extend the knowledge and experience gained to fellow taekwondo members in Malaysia. With the guidance from both Master Leong Yong Wah and Madam Yeap Swee Bee, he aims to build a good demonstration team, a promising team of tournament fighters and hopefully, someday, conduct a taekwondo class of his own.

Article was written in May 2006