An Interview with Tan Kien Tat who had attended the 2007 WTF-KHU Partnership Taekwondo Training Program in Korea.

Q: Was training in Korea very different from Malaysia?
A: Yes, the environment was totally different. The spirit and enthusiasm of the Koreans really amazed me.

Q. Were the Koreans very strict and discipline?
A: They were very disciplined and focused during training. We had to do our best and pay full concentration to our training. The Koreans are also very friendly and have very good manners.
Q: Can you describe your training program that was carried out in that 1 month?
A: On my first day, there were only 3 members including me that undergo the training. We were given target kicks and stepping basics. Two more members joined us on the 2nd day. Basically, the first week was just a warm up. The second week training began to get tough. On most mornings, we did physical training like 3 sets of 50 times step-ups on chair. To ease ourselves from all the tough training, we went to Dae-ja-yeon Oriental Hospital on the 16th of January where we had a massage and treatment. We even got to shop at Itaewon where the goods there were cheap. We started training with the Kyung Hee University Taekwondo Team at the third week of the program. The training started with speed kicking. Training with the team was very interesting as the Koreans were full of spirit and enthusiasm. I can feel that the Koreans really love this martial art. We also had fun playing soccer with the team on Friday and even got to treat ourselves to a spa & sauna retreat. We went to Dong-Sung High School to train combination action kicking and counter attacks.In the fourth and final week, our training was focused on stepping, physical strength and speed kicking. We had to postponed one training to the afternoon due to heavy snow. Training with the Kyung Hee University members was getting tougher. On one Wednesday, we went to Seoul to watch a performance called ‘jump’ which introduces martial art. In this 1-month, we had programs arranged for us practically everyday and night. We attended rescue, bandage wrapping and Korean Language classes. I personally feel that I gained a lot of knowledge in these classes. The teachers were all very patient at translating the meanings to us. On our last day, we had a promotion test where we were tested on our Korean language through self introduction and singing Korean songs. Later on, we had a rescue and bandage wrapping test where we used a doll just like in practice sessions. We had to wrap ankle and wrist injuries. Lastly, we had a Taekwondo test which consists of basic kicks, combination kicks with target, target kicking and target sparring. We then had a farewell pary at night. 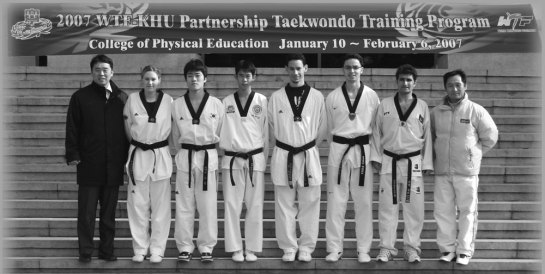 Q: How do you feel about the whole experience?

A: I feel very happy to be able to attend the training program in Korea. I gained a lot of knowledge and experiences that are very useful in my Taekwondo training. I would like to express my gratitude to MTA and Mr. and Mrs. Leong for giving me the opportunity to attend the program.

Article was written in June 2007