The Yi (Chosun) Dynasty took over the reign of the peninsula from 1392 to 1910. There is strong evidence that ‘Subakhui’ (another name for Taekwondo) was also very popular in the early days of the Yi Dynasty. Concrete references to Taekwondo can be found in their historical records.

There was recorded in one of their journals that in order to pass a certain government examination, one has to defeat at least three other applicants by means of his Taekwondo skills; and King Taejong used to enjoy watching Taekwondo competitions. Another record tells that during the imperial Japanese invasion, about 700 patriots fought against the invading soldiers with their bare hands. And it was said that they were all Taekwondo experts. 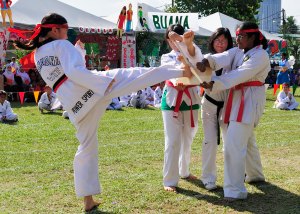 The Kukkiwon, the World Taekwondo center is located on a hillside in the Kangnam District in Seoul, Korea – some five minutes walk from the intersection of the Kangnam Subway Station.

The reinforced concrete building with beautiful original Korean style roof was constructed in 1972 to house Taekwondo related organizations and to provide Taekwondo practitioners and contestants with modern facilities for training and competition. The Secretariat of the World Taekwondo Federation is incidentally located here.

However, the later years of the Yi Dynasty saw a decline in the popularity of  ‘Subakhui’. Founded on the ideology of Confucianism, the Yi Dynasty places more importance on literary art than martial art. Thus it suffered an eventual loss of official support from the central government. The availability of gunpowder and new types of weapons was also another factor. And then, there was also the power struggle among the government officials themselves.

In was only in the days of King Jungjo after the disgraceful invasion of Korea by the Japanese in 1592 that the royal government revived strong defense measures by strengthening military training and martial art practice. The Japanese colonial government totally prohibited all folkloric games including takkyon in the process of suppressing the Korean people. The masters of the taekkyondo (Taekwondo) were also under constant threat of imprisonment, which resulted in an eventual fade-out of taekkyondo games. Taekkyondo had been secretly handed down only by the masters of the art until the liberation of the country in 1945.

Construction of the Kukkiwon, a million dollar project, began on November 9, 1971. The first and only gymnasium of its kind in the world was inaugurated on November 30, 1972 with many sports leaders and social celebrities attending. The completion of the Kukkiwon building was made possible by the sole and devoted effort of Dr. Un Yong Kim, President of the Word Taekwondo Federation and then President of the Korea Taekwondo Association.

Upon liberation from the Japanese colonial rule after World War II, the Korean people began recovering the thought of self-reliance and the traditional folkloric games gained back their popularity. A Taekwondo demonstration was held in honor of the first President of the Republic of Korea, Syngman Rhee on the occasion of his birthday, thus distinguishing Taekwondo from the Japanese Karate which had been introduced by the Japanese rulers.Martial art experts began opening their Taekwondo gymnasiums all over the country. After the end of the Korea War (1950-1953) about 2,000 Taekwondo masters were sent to propagate the art in more than 100 countries in the world.