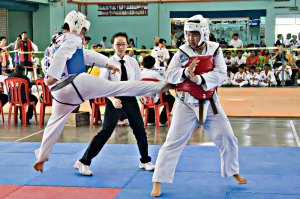 Since the beginning of time, man has always demonstrated great skills in survival. Apart from the adverse weather conditions, man often has to contend with wild beasts in the jungle and enemies of his community. As such, man is forced to learn to defend himself with his own bare hands and feet as he seeks to develop a system of fighting techniques. Some of the techniques employed are actually those of the attacking and defensive movements of animals which they observed and analyzed and incorporated into their own self-defense system.

As they persist in their quest to improve themselves in their self-defense skills, they inadvertently begin to organize competition among themselves where they will pit their strength and skills against each other. This is often done during their tribal festivals.  It has resulted in much improved skills and are often packed with deadly power. It also improves their fitness level which has benefited them as they go about doing their daily work, which is mainly farming or hunting. 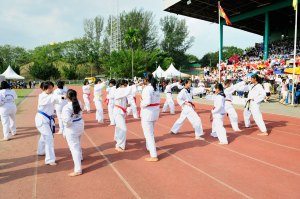 The lifestyle of the hwarangs is quite similar to that of the sonbae. Here, they are selected from throughout the kingdom through contests specially organized for that purpose. After the selection, they lived together in a group and concentrate on learning, training subak (Taekwondo), fencing and horse-riding and even wrestling. Like the sonbae, in peacetime, the hwarangs served the community by helping in emergency aids and the construction of fortresses and roads. And they were always ready to sacrifice their lives for their kingdom.

The hwarang followed rigid commandments of loyalty to the king, filial piety to parents, unswerving loyalty to friends, bravery in battle, and prudence in taking life. This became the root of national morality and strength. 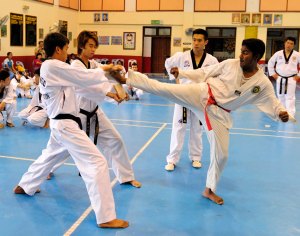 There is also strong evidence indicating that the hwarang drilled in taekwondo.  In front of the Sokkuram Grotto in Kyongju which was during the reign of King Kyongdok of Silla, stand the stone images of two warriors in taekwondo stances. They form an attack pattern by raising their right hands to their ears while defending their lower bodies with their left hands. One of today’s taekwondo  patterns, Kumkang block was named after these two warriors, “Kumkang Yoksa”.

To face the threat of invasion from within and without the peninsula, each kingdom was forced to build up their military might. And this was done through the organization of the youth warrior’s corps such as the “hwarangdo” in the Silla dynasty. This is where their youths were subjected to rigorous martial arts training daily apart from their normal subjects. Martial arts being their most important subject. The main objective was to produce a group of brave, strong, loyal, skilled, and disciplined warriors that would be able to defend its sovereignty and ultimately also to conquer the others. 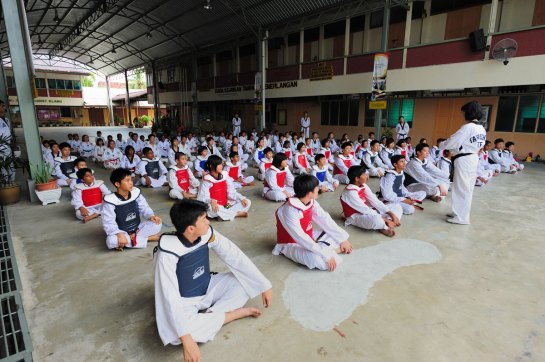 Silla dynasty gave way to the new dynasty of Koryo founded by Wang Kon in 918 A.D. Koryo endeavored, with some success to expand its territory toward the north while successfully fending off outside aggression.After reunifying the Korean peninsula, the Koryo dynasty further developed taekyon (Taekwondo) more systematically and made it a compulsory subject in the examinations for selection of military cadets. In fact, in the early days of the Koryo dynasty, martial arts abilities were the only required qualifications to become military personnel because the kingdom desperately needed the national defense capabilities after conquering the whole peninsula.

In has been recorded in the Korea journal, that a certain ordinary soldier was promoted to a general merely based on his mastery of the taekyon techniques. Taekyon contests were often organized where the skilled ones were immediately selected to be military officers. There were lots of example in which many taekyon-mastered youths were picked up as officials.

Unification of the three Kingdoms 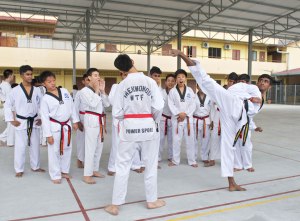 Koguryo dynasty was founded in B.C. 37 on the northern part of Korea, surrounded by the hostile Han (Chinese) tribes in the north. To strengthen their military might for defense, great effort were made to raise their youths into strong warriors called “sonbae” somewhat like the “hwarang”. “Sonbae” means a man of virtue who would never retreat from a fight. It has been said that “sonbae” lived in groups and apart from their daily rigorous martial arts training, were always devoting themselves to their community in time of peace. Constructing roads and fortresses were a few of their deeds. Annually at certain rituals, people would gather together for a sword dance, archery or subak (taekyon) competition implying that subak (Taekwondo) was one of the popular events for the ritual in the Koguryo days. A mural painting at the Samsil Tomb with two warriors engaged in a face-to-face match in taekyon (Taekwondo) stance confirms that it was already a very popular art at that time.Silla dynasty was founded in B.C. 57 on the southeastern part of Korea. With Paekje dynasty on its west flank and the Koguryo on its north, Silla was impelled to arm itself with the development of the martial arts. The youth warrior’s corps (“hwarangdo”) which actually means “flowering youths” was formed because of that. These youths were well trained in filial piety, loyalty to the kingdom and sacrificial devotion to society to become important personalities for the reign of the kingdom. Notable among them were Kim Yu-sin and Kim Chun-Chu who made a definite contribution to the unification of these three kingdoms. Silla unified the peninsula by conquering the other two kingdoms – Paekje in 668 A.D. and Koguryo in 670 A.D.

Subak – an old name for Taekwondo

By this time, Taekwondo was already very popular with the people. Subak, as Taekwondo was then called, was practiced as a fully developed sport with detail rules. Taekwondo was believed to have occupied a strong social position in view of the fact that those skilled in Taekwondo were favorably considered for promotion. The following excerpts from the History of Koryo provide further evidence of the popularity of Taekwondo at the time: 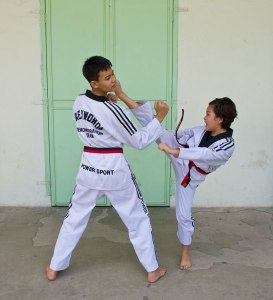 King Uijong promoted Yi Ui-Min from the military rank of Taechong to Pyolchang because his Taekwondo skill was outstanding (chapter 41, Volume 128, History of Koryo).

The King observed Subak-hui contests at the Hwabikung Palace and Ma-am (volume 36, History of Koryo).

These historical records clearly show that Taekwondo was not only a popular, but also a court game often observed by kings personally.

The Origin and History of Taekwondo, Part 2