It was an adrenaline kick in weekend and results to not only fruitful in Medals but also sportsmanship and improved in parenting relationship.

This simple note is especially dedicated to the whole family of Power Sport Taekwondo Team. We as parent are proud to share the spirit that the Team member inculcated:

1)        Selvanthraan as a President of SMK La Salle Taekwondo Club, all he said when he was praised on his hard work were “  Aunty , I am the President  , I must show good example “. Good Leader showing good example, Keep up the good job, boy!

2)        Megat Hail aka Harimau Hail (name given by Master Leong), this little guy small in size but big in fighting spirit. Though he might not be in the same league with the opponent on his second bout, he stood up after a several falls and continues to the end of the bout. Salute, Small little Giant! 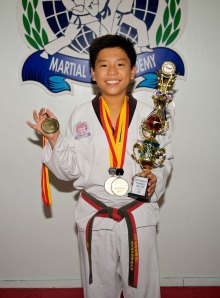 3)        Sebastian Lee Dreyer, a young man that stops tournament training for four months but managed to beat all four giants and won himself a GOLD medal. Amazing!

4)        Janice Maria with her determination and of coz some cheering from the family, started with a solid head score and won the opponent by 11:5. She managed to collect two bronze in this MSSD(Sparring & Poomsae). Bravo!

5)        Sabrina Lee Dreyer, Our Heroin of the day, Though she did not win the bout but she won our heart  for her fight with a head or two taller opponent , she charged the opponent till the end of bout and was only one score behind. We love you, baby!!! 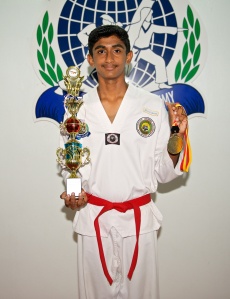 6)        Leong Harn…, though he only collected a bronze (in sparring) but we were so proud of the improvement. He started with first round of 0:4 but won the bout with 10:7 by collected three head score. Thank you.

7)        The finale of coz belongs to our Great Rubeni Selvaraj. A five times MSSD champion who won this sparring with a twisted wrist. We want to see more fighting spirit. Keep up the “Never Give Up” spirit.

By the way, all these kids are under the umbrella of all the young coaches, thank you again for being there for the kids. Sir Yap, Sir Kien Tat, Aneta & Kah Chun.

Well , we must not forget the backbone of the family Master Leong and Mdm  Yeap, thank you from the bottom of our heart.